Despite some difficulty from security guards preventing many of our students getting in more than 30 students are currently in occupation of the aston webb building. this is a copy of our written statement.

Students at the University of Birmingham have embarked on this occupation because we believe the Government’s cuts to be economically unnecessary, unfair and ideologically motivated. We stand in solidarity with unions and seek to be active members in a broader anti-cuts coalition. The government must understand that if they continue to destroy the livelihoods of the majority to benefit the rich and powerful minority, they will face increasingly widespread and radical action.
The government is however not the only catalyst for our action. This University currently adheres to a strategy which prioritises corporate profit above the value of education. To this end we have set out an alternative budget proposal that fairly shares the burden of government cuts. If the Government and University continue with their marketisation of people’s lives this will only be the beginning.
We extend solidarity to those defending their futures from these regressive measures, which move to segregate our society by means of favouring the rich and powerful, who remain out of touch with the needs of the majority. However, we feel there exists an imperative for change within the University of Birmingham, as not only was the Aston Webb building the stage from which Nick Clegg fed the nation false promises, the financial surplus of the University of Birmingham will stand at £25million irrespective of cuts and a fee increase. The university still operating on a substantial surplus renders the increase in fees nothing more than an exercise of greed and social segregation. Furthermore, the fact that the Vice Chancellor of the University of Birmingham enjoys an annual salary of £342,000, whilst happily imposing cuts such as the 4.4% decrease to the wages of support staff paid £12,915 pa is an outrage.
We will not stand for this disgraceful behaviour in our university.
Neither should the nation for the effect these cuts will have across our society.
We support the actions of Unison today in calling a mass rally, and call upon other parties and organisations to rise up and take a stand against the exploits of our apparently liberal affected Tory government.
We demand

2.    For the University to criticise the Browne Review as a socially regressive plan that will limit access to
education.

3.     A budget of the university’s financial plans, broken down by department for the next five years be made
public.
4.       The “Sustainable Excellence” document, which lays out the university’s plans for cuts, to be made public for
the benefit of those affected and subsequent scrutiny.
5.        David Eastwood, the vice chancellor, to resign for his role in the Browne Review and his demonstrated
lack  of impartiality on the issue.
6.       Pledge from the University to not make any preventable cuts to any courses or services.
7.       For academic and support staff at the University of Birmingham to not have their wages cut by the
university.
8.       The university to send representatives to the occupation to engage in open negotiations with students,
providing a forum for the student body to represent their views.
9.       For the university to allow students to come in and out of the building, to use the space we have occupied
for 36 hours as a means for public debate and raising awareness, after which we will leave peacefully.
10.       For no recriminations for the students involved in the occupation.
We call for
1.       Liberal Democrat MPs to stand by their pledges made at the last election to vote against an increase in tuition fees.
2.       Students, staff and workers to stand united against government cuts, working towards an understanding of each other needs and positions in order to build a broad and effective movement.
Posted by Sebastian Egerton-Read at 00:27

Banner Drop of the campus Barclays, The bankers caused the crisis, students won't pay for it!

Debate With the Registrar 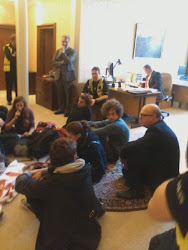 The Registrar and secretary, Lee sanders, attempts to justify the Vice chancellors lobbying for a fees hike to students. Needless to say, no one was convinced, we can at least thank him for giving us the chance to talk with him, he is the first member of the university management to talk publically with students at the University of Birmingham, more meetings between the university and the student at the sit in.

Sit in the Vice Chancellors office 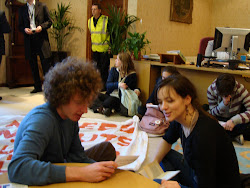 Sit in the Vice chancellors office. The area usually as pro fees and cuts central, the place where the Browne review was partly drafted, was today turned temporally in anti Cuts and anti Fees HQ for Birmingham University. The students abandoned the sit in after the university promised direct talks on Monday with management for the students (the first public talks on fees in years) and called the Registrar and Secretary lee sanders down to debate with the students the pros and cons of the fees hike.